The Dordogne is nicknamed ‘the land of a thousand and one castles’ due to its superbly restored chateaux which are scattered across the region, dating from the Middle Ages to Renaissance but also decorated in Classical style. 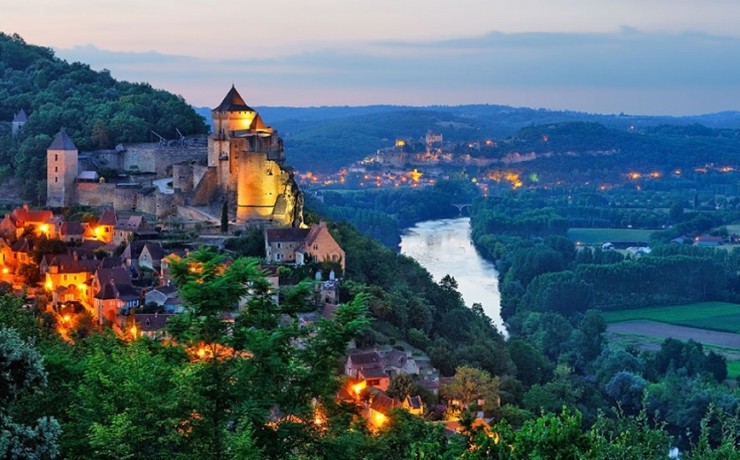 These buildings have spanned centuries, survived history upheavals and anecdotes are written into their bricks and mortar. Among the thousand or more castles, located in the Périgord, many are open to the public, allowing visitors to enjoy this magnificent aspect of the region’s heritage.
Castles that are open to the public are e.g. the Chateau de Bridoire in Ribagnac close to Bergerac, the Château de Sauveboeuf in Aubas close to Montignac, the Château de Jumilhac (13C-18C), perhaps the most romantic residence in the Périgord Limousin area; the Château de Puyguilhem (16C), with its Loire valley-style architecture; and the majestic and imposing Hautefort castle, just a stone’s throw from the Auvézère valley. Also worth a visit are the Château de Losse, its silhouette reflected in the Vézère river; the Château de Castelnaud on the southern bank of the Dordogne, standing opposite Marqueyssac and its gardens; and Beynac, a formidable fortress dating from the Middle Ages. Bourdeilles castle represents two very different periods, including a feudal fortress and a Renaissance pleasure castle with a marvellous collection of period furniture. Don’t miss Les Milandes, a castle that belonged to Josephine Baker and Jo Bouillon. The Purple Périgord also has its fair share of castles, including those of Lanquais, Monbazillac and Biron. 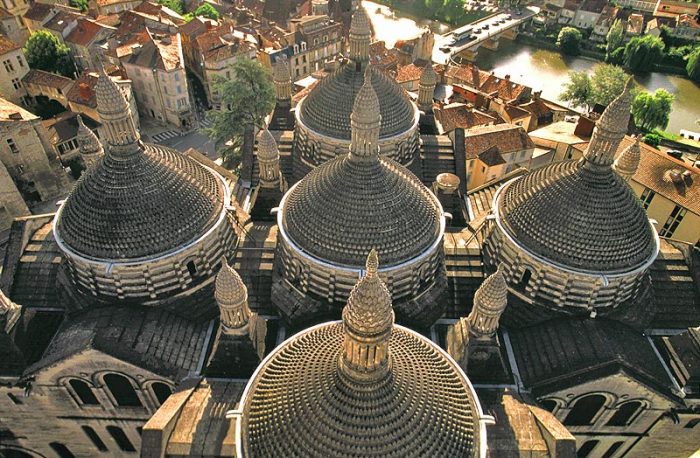 The early Christian art is abundantly represented in the Dordogne. Located along the UNESCO World Heritage route to Santiago de Compostela, the Abbaye de Cadouin is the most important example of monastic architecture in the Périgord.
Its cloister is a masterpiece of the Flamboyant Gothic style of architecture, dating from the 15C and 16C.

The Cathédrale Saint-Front in Périgueux also stands along the same pilgrim’s route. The Abbaye de Chancelade, near Périgueux, is another architectural gem worthy of particular note.On the border of the Dordogne and the Charente, the Romanesque churches around Ribérac,mostly built during the 12C, are a charming feature of the small villages of the Dronne valley. The Abbaye d’Échourgnac in the middle of the Double forest is a working abbey where the nuns still produce excellent jams and the Périgord’s oldest cheese, the Trappe d’Échourgn.

Prehistory. In our ancestors’ footsteps – 450,000 years of history

The Vézère valley, which takes its name from the river running through it, is also known as the Valley of Mankind. This valley is a site of exceptional interest, with 147 prehistoric sites dating from the Palaeolithic Age and 25 painted caves. At the heart of this shrine to prehistory is the famous Lascaux cave – nicknamed the prehistoric Sistine Chapel – surrounded by 15 UNESCO world heritage sites. Homo sapiens settled in the limestone cliffs here, and it was also in this valley, particularly around Lascaux, that prehistoric art first developed. In Montignac, the original Lascaux cave (dubbed the “Sistine Chapel of Prehistory”) is no longer open to the public but a cave-full size shows faithful reproductions of many of its most beautiful frescoes.The two galleries give a beautiful and clear illustration of wall paintings  from Cro-Magnon through to Magdalenian man. Insider Tip: In summer, tickets for Lascaux must be reserved by phone (055 351 9623) 3 to 4 days prior to your visit and are purchased in Montignac, next to the tourist office. Tours in English are available.There is a concentration of major sites in and around Les Eyzies de Tayac, which together form a coherent group of prehistoric remains: these include paintings in the Font de Gaume and Bara-Bahau caves; the engravings at Les Combarelles; the Abri du Poisson; Bernifal; the Abri Pataud; Laugerie Haute en Laugerie Basse. At the heart of this open-air “museum” in the Vézère valley, the National Museum of Prehistory reflects the continuing developments in archaeological research. Re-opened in 2004, the museum now houses the largest Palaeolithic collection in France, with exhibits such as carved stones and bones, decorative art, burial items and fauna; it is also home to the world’s leading collection of engraved and sculpted stones from the Palaeolithic period. Interactive displays and audiovisual sequences help to provide an informative and educational introduction to the prehistoric period. A new site , open to the public from spring 2014, is the museum of Abri Cro-Magnon in Les Eysies, Tayac, which gives a new insight into the Cro-Magnon man.