The Dordogne, one of the departments with the highest number of sunshine hours in France, is located in the Aquitaine region, east of Bordeaux, in the southwest of France. The  Dordogne has a continental climate, influenced by the Mediterranean see and the Atlantic ocean. It’s a climate with warm summers but it can  also be quite cold in winter. The weather however feels  almost always pleasant ,this is due to the absence of wind.
The Dordogne is home to approximately 380,000 inhabitants in an area of 9225 km². Therefore, the Dordogne is the third largest department of France. It is located in the Aquitaine region and is crossed by the motorway A 89 (Bordeaux – Lyon). The four major cities are Perigueux, Bergerac, Nontron and Sarlat. In 1790 the country was divided into departments, these were usually given the name of the main river and so this department was called “Dordogne”. Before that, the region was called Périgord.(due to the Gauls who inhabited this area, called Pétrocorii).
The county Perigord originated in the 11th century and later fell to the home of Albret. Under Henry IV, the Périgord  was part of the French Crown. The residents of Dordogne, called Périgourdins (the name of the former province of Périgord which almost matches with the department Dordogne) , lived mainly in the capital Périgueux.
Nowadays the department is divided into four areas: 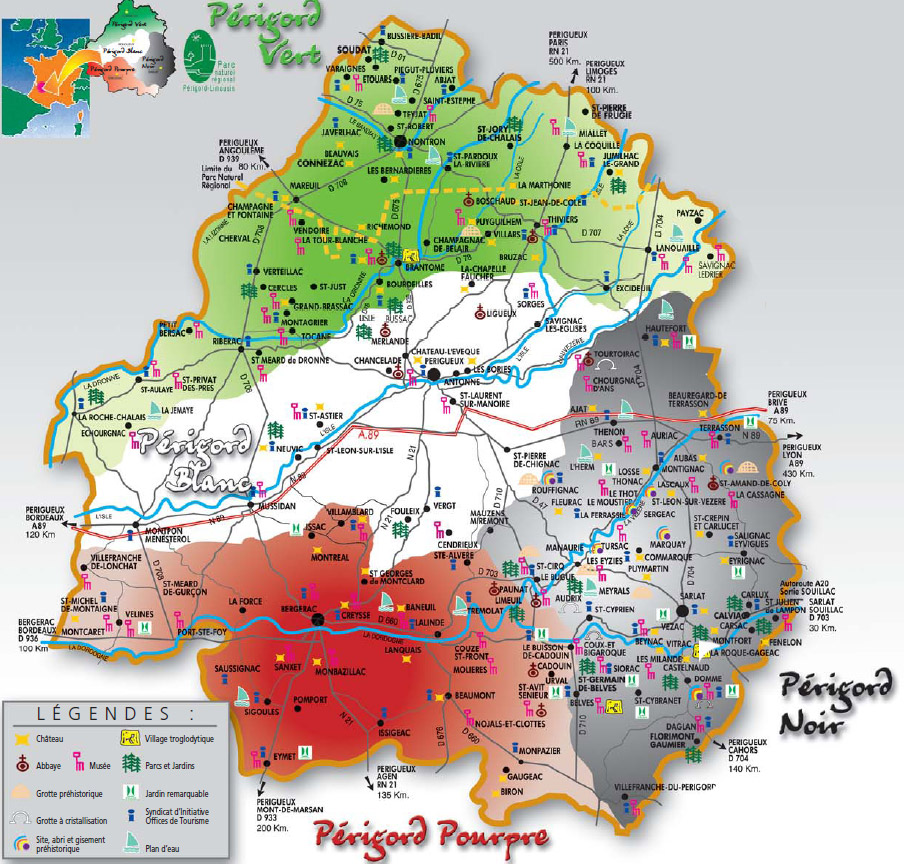 Extending across the most northerly swathe of the Dordogne département, the Green Périgord takes its name from its profuse vegetation and numerous streams and rivers (such as the Dronne, Isle, Auvézère and Bandiat), as well as its varied natural landscapes and rich historical heritage. These natural assets have led to the creation of the Parc Naturel Régional Périgord Limousin, which extends across two départements. One of the park’s main aims is to protect and conserve local resources and traditional skills. On the border with the Charente, natural features such as meadows, wooded hills, cultivated fields on chalky plateaux, and the lakes and trees of the Forêt de la Double combine to create the gentle and harmonious landscapes of the Val de Dronne. The attractive natural landscapes of the region are further embellished by its charming traditional houses, Romanesque art and fine architecture visible in towns such as Brantôme and St Jean de Côle.

Situated in the heart of the département, the White Périgord takes its name from the whiteness of the region’s stone, which is so prized by sculptors. The area is crossed by the Isle and Auvézère rivers, which offer excellent fishing, and is also home to Périgueux, the old city of Vesunna with its Gallo-Roman remains. Périgueux, the capital of the département, is a “Town of Art and History”, with narrow streets bordered by townhouses in its protected historical districts and the Saint-Front cathedral, a stopping point along the Way of St James UNESCO World Heritage Site. This region is traditionally known for its homely cuisine, often flavoured with truffles, a local delicacy which is highlighted at the eco-museum in Sorges. Regional produce, such as strawberries and fatted ducks and geese, has pride of place in the lively markets which are held here throughout the year. A trip to the White Périgord would not be complete without a visit to its castles, delightful villages and museums dedicated to local crafts and traditions.

In the south-east of the département, the Black Périgord is recognised worldwide for the wealth of prehistoric remains in the Vézère and Dordogne valleys and has been designated as an International Centre for Prehistory. The Vézère valley is home to some of the richest prehistoric sites in Europe, including Palaeolithic sites, caves and natural rock shelters. Fifteen of these decorated sites are classified as UNESCO World Heritage Sites. The Dordogne river meanders between impressive limestone cliffs and holm oak forests. This valley has a concentration of the most beautiful buildings of the Middle Ages and the Renaissance, including castles perched on rocky promontories, the villages of Domme, Beynac and La Roque-Gageac and, of course, Sarlat, officially classified as a “Ville d’Art et d’Histoire” (“Town of Art and History”). With its lauze stone roofs, Sarlat has retained much of its extraordinary architecture, characterised by medieval houses and Renaissance mansions. Most of its monuments are listed or protected historic monuments.

Vineyards and bastide towns are the two jewels of the Purple Périgord, situated to the south-west of the département. Standing in the heart of these famous vineyards which cover an area of 12,000 hectares (the region has 13 appellation contrôlée vineyards, including Monbazillac, Pécharmant, Saussignac and Montravel) is the town of Bergerac, often mistakenly associated with Cyrano, the famous long-nosed character created by novelist Edmond Rostand. However, the town does boast the French author Michel de Montaigne as one of its native sons. The old town of Bergerac has retained much of its 14C, 15C and 16C architecture, including many half-timbered houses. The development of the town was closely linked to the wine industry and the proximity of the Dordogne river. As a result, Bergerac is the ideal base for exploring the region’s vineyards and old villages. The fortified towns known as bastides (Monpazier, Beaumont de Périgord, Eymet, Lalinde and Moliere)bear witness to the conflict between the French and English which took place in the Périgord from the 12C onwards. Les Magnolias is located in the Purple Perigord at the entrance of the valley of the Dordogne.

Quote : “Dordogne, made by the gods for the gods” – Richard the Lionheart king of England and Baron of Beynac castle

Les Magnolias is located in the tourist heart (the golden triangle) of the Dordogne and offers the ideal base to explore the surrounding area. The Dordogne is without any doubt the nicest and most diverse region in France, famous for it’s stunning scenery, prehistoric caves and dwellings, medieval towns & villages, fortified castles and strongholds, bastides, and the list goes on and on.. Ooohhh and let’s not forget it’s friendly people, delicious cuisine, excellent wine,festivals , cozy markets ,and all the activities you can imagine… the word “bored” does not exist in the Dordogne dictionary.

The Dordogne of today is synonymous with enjoyment. Enjoying timetravel through history, enjoying culture in towns and villages full of art and architecture, enjoying nature and gastronomy and enjoy the local people. There is lots to see and lots to do for people of all ages in the Dordogne.

In Les Magnolias you can also simply do nothing. Go laze. Grab a comfortable chair and enjoy, on your private terrace, the magnificent views. The constantly changing light makes the trees and plants color differently from moment to moment . Give yourself time to watch the swans and listen to the river but also grab that book you wanted to read for so long. Here you can find the time and the peace and quiet for it. If you want a daytrip then click on the above enjoyement links. This will not give you a complete overview of all activities , but still a very wide selection. It also gives  you an idea of what can be done in the surroundings of Les Magnolias. If you are looking for something specific, please let us know and we will do our best to come up with a matching suggestions. We have many tips for young and old. We can also include activities in a package to fulfill your needs completely. Please feel free to contact us to discuss the possibilities and rates. In your room you will find  information about these activities and attractions. You can also find information about the Dordogne at the reception. Almost all activities and atractions are within one hour drive of Les Magnolias.